Simon Harding has recorded as Yellotone since 1998, when he began to distribute tapes, then CDs, to friends and acquaintances. The second of the full-length CDs, "In Flight Owl" (2000), attracted the attention of the London-based electronica label AI Records, for whom Yellotone made several compilation appearances and a split 7-inch. Harding released his first EP, "Geen Mayo", in 2003, amongst whose fans was John Peel, who played "But Side Sits" on his radio show. Yellotone then went to work on his debut LP, Tar File Junction. Following this, in September 2003 he wrote and recorded about 30 tunes in a 2 month period, 14 of which were released as "Live At The Potters Wheel" - a friends-only Christmas Cdr whose 50 commercially available copies sold out in 3 hours online. 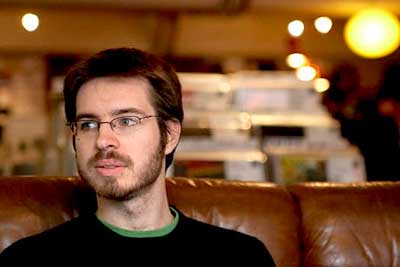 Tar file junction was released in September 2004, receiving great reviews (see reviews section) and airplay on Radio 1 and XFM in the UK, as well as college airplay in the US.

Yellotone followed this up with an EP, "Yellotone Plays Rush Goalie". Partly composed on a trip to Japan, Rush Goalie for the first time began to incorporate the tone's indie rock influences in a more direct way. This was released to friends and washerwomen alone. The rest of 2004 saw Yellotone complete his first documentary soundtrack work for the director Kate Taunton "Dancing lessons with God" - and play several gigs around the UK including Glasgow, Dublin and The Dedbeat Festival where, accompanied by a couple of a dancers and a guest appearance from Buddy Peace he tore up the stage on the Friday night. Yellotone also recorded a demo version of a second electronic album, but this was left unreleased since he didn't feel he could do the songs justice on the limited equipment he owned.

Since then Yellotone has set up his own label "Kiss My Mint Condition Records", completed more documentary work for Channel 4, ITV London and the BBC, and also finished the follow up to Tar File Junction.

"Executive Timber" showcases Yellotone's singing for the first time and is an altogether more song-based affair, marking an evolution away from "Rush Goalies" looser structures. Recorded in the second half of 2005, Executive Timber became 11 tunes culled from a batch of about 80 or so that Harding wrote that year. Some of the remaining tunes were given out to friends in the form of the EP, "Bill Core, Oil Floor", in early 2006.

Whilst sorting out the release of Executive Timber on CD and through the new digital label, Viva last, Yellotone recorded another set of tunes, "Coming Up in The Can", which was written over a 10 day period in late 2006. Again, these were distributed amongst friends, though some will probably see the light of day in a different form, since Yellotone has now put together a 3-piece band, the Attorneys, consisting of Nick Prosecution and Matt Defence with occasional input from Johnny Noonoo (on remand). Initially put together for live gigs, Yellotone and the Attorneys have delighted those that have had a chance to see them and will be recording later this year.